Detroit gets a lot of bad press, and often for good reason. A lot of the city can be dangerous and drugs are a huge problem in some areas, leading to violence, poverty and many other issues that Michigan’s government has been trying to fix for years.

BUT… Detroit is also a spectacular city, one rich with history, entertainment and diversity. And a lot of it is “coming back,” and should be explored!

I live in Grand Rapids, which is the second largest city in Michigan behind Detroit, and is located about two to two and a half hours from there. So it wasn’t too hard to speed off one night after work, spend the night and take a day off for exploring. Plus we were in need of a little trip before the summer ended completely and the weather got cold.

Turns out we picked a cold and rainy day anyway, but we made it worth our while.

Originally we planned on just a day trip, but we found a great deal on Hotwire. This isn’t even a sponsored post, by the way. I just love searching the site and finding deals on there. Plus it makes me feel a little spontaneous.

We stayed at the Atheneum Suites Hotel, which was a steal online and an absolutely gorgeous hotel. The lobby is beautiful, the room was spacious and well-designed (with a nice view of downtown) and the bartender at the hotel bar was efficient and super friendly! It was part of the Greektown area, which meant there were plenty of restaurants and bars within walking distance too.

We didn’t do too much besides stopping by the casino (I had never been inside one before!) and grabbing a couple drinks before retiring back to our suite for relaxation and bedtime. We had a big day planned!

My husband is an early riser, but we slept in just a little bit because, you know, we were on vacation. Then it was time for breakfast. Originally we planned on stopping at Dime Store, which came highly recommended, but we happened to drive over there right around morning rush hour… so by the time we found parking we were no closer to the restaurant than if we had just walked from our hotel. Instead, we decided to grab coffee and pastries.

The Guardian Building, built in the 1920’s, is an iconic skyscraper and stunning example of Art Deco architecture and design. Plus there’s a Great Lakes Coffee shop inside! We stopped there for our little breakfast and to marvel at the vaulted ceilings and bright colors. 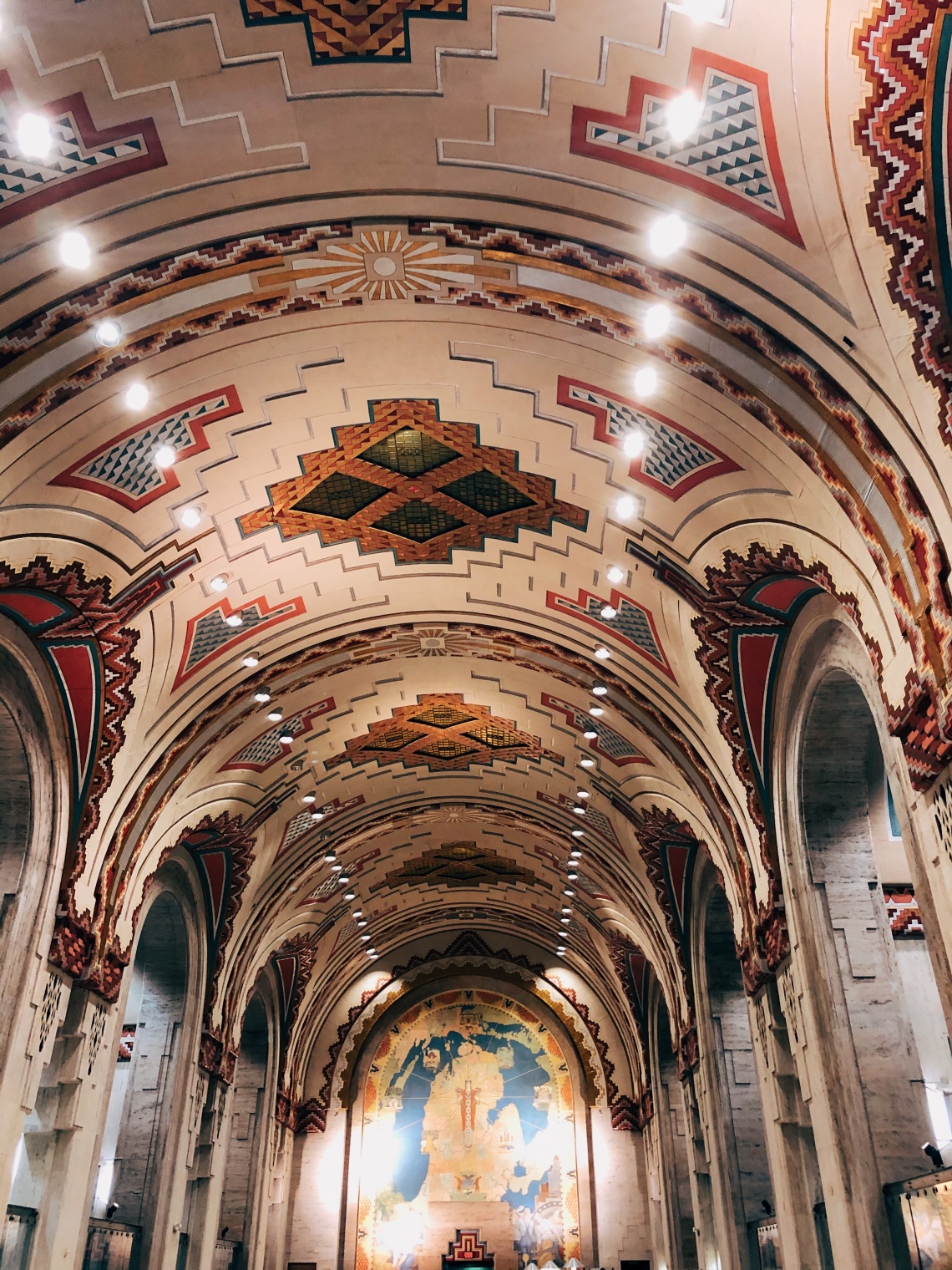 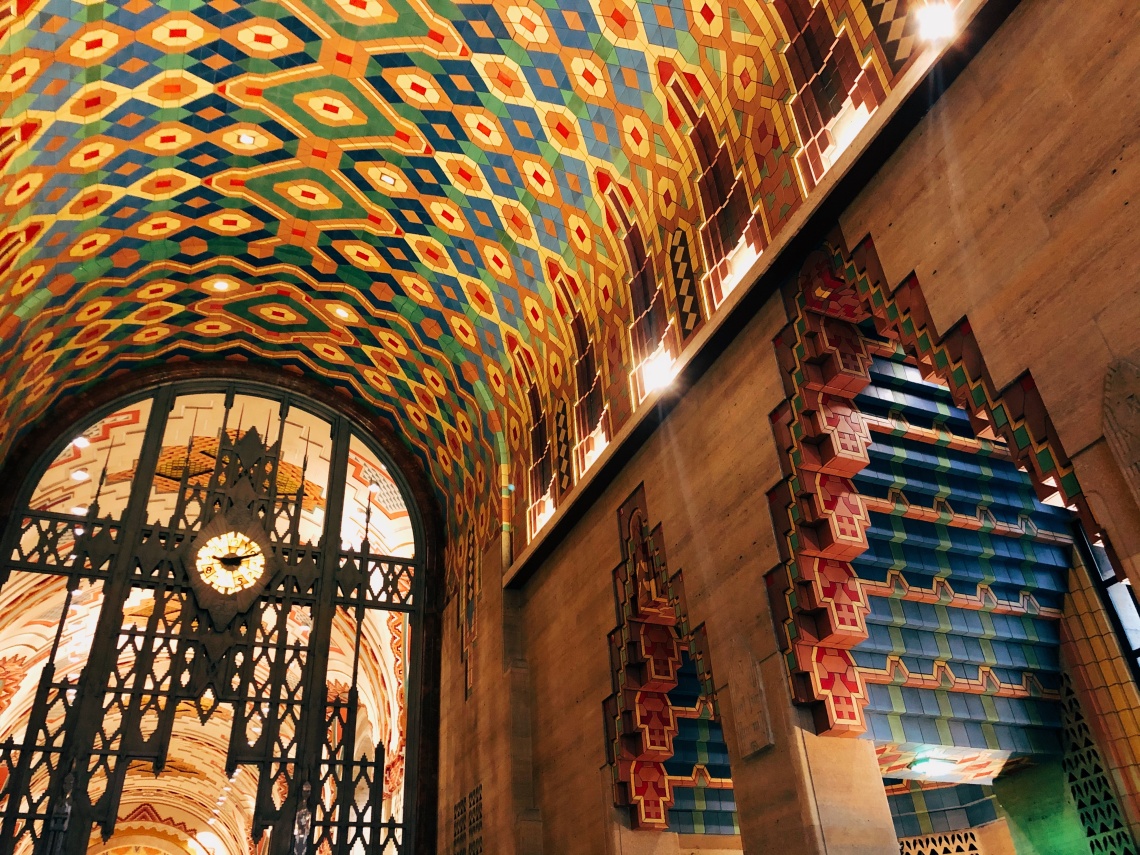 We knew it was supposed to rain soon, so we made the most of the morning by walking up and down some of the downtown streets, checking out Campus Martius park and watching business people rush to and fro. 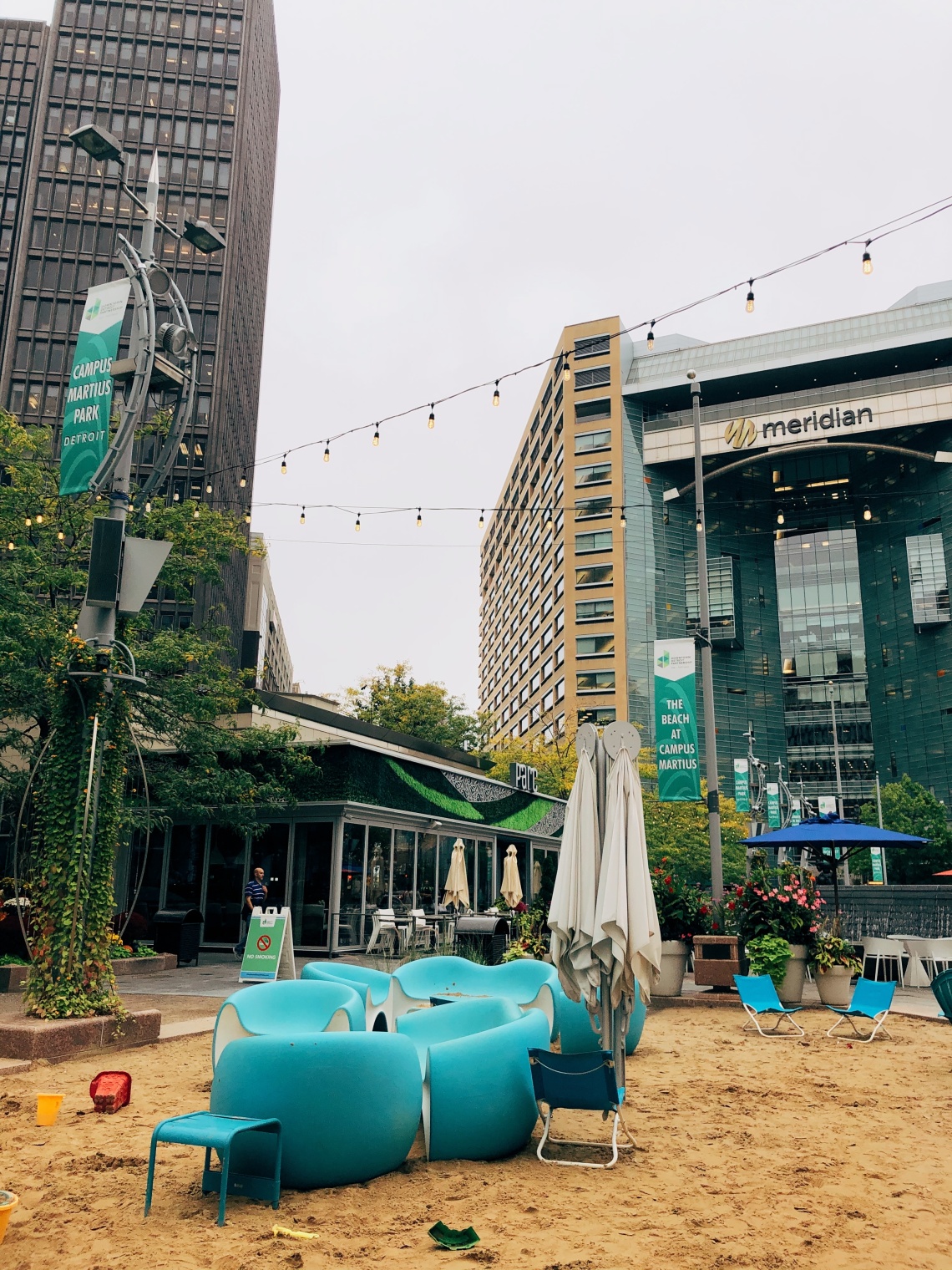 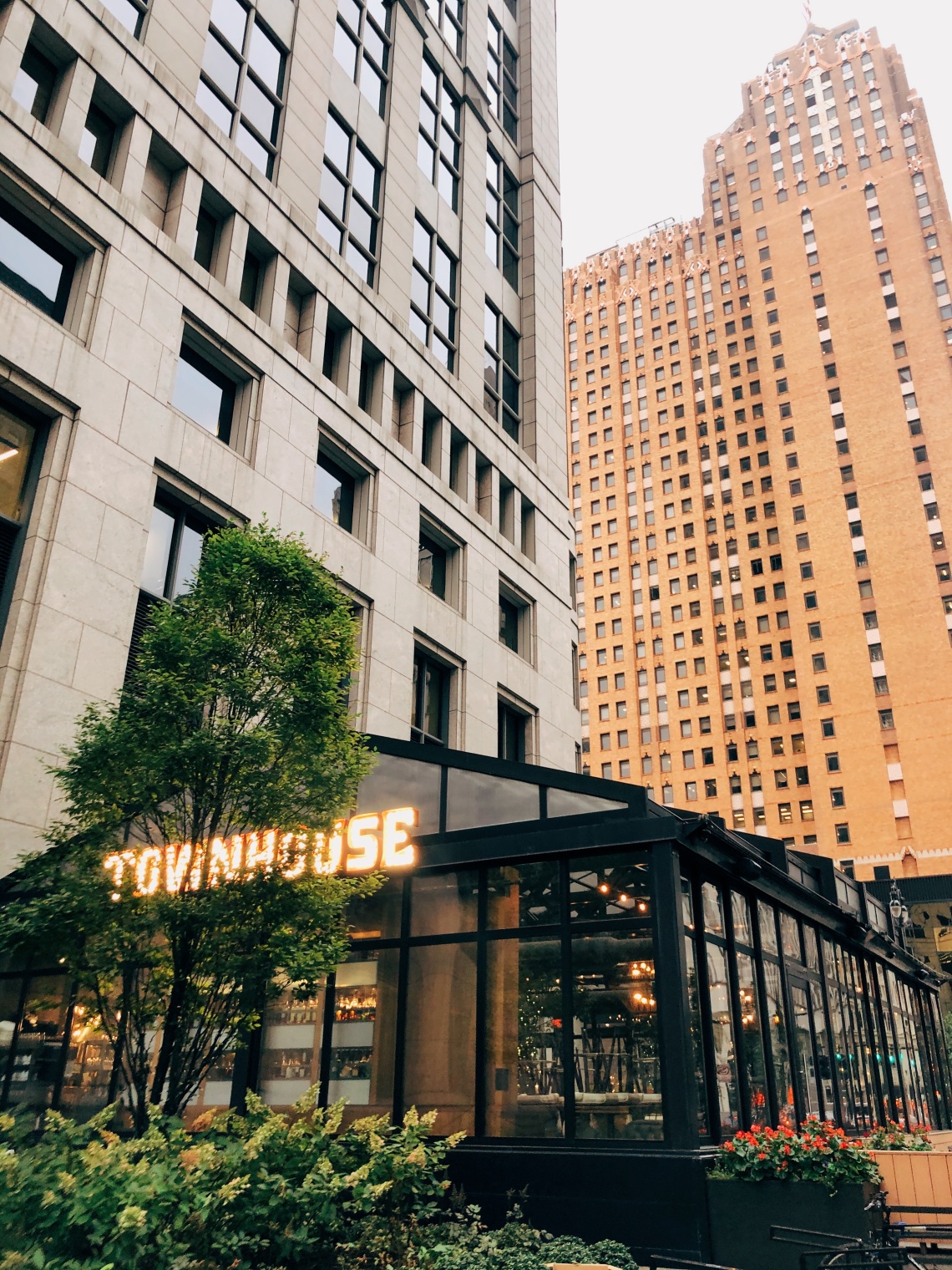 Isn’t Detroit more photogenic than you imagined? The sidewalks were also great for walking… although I wished we would have tried out those electric scooters.

After walking around for a bit, we noticed the drizzle was getting a little heavier so we moved to our rainy day backup plan– the Henry Ford Museum!

There’s a lot of cool historical stuff at the museum, which is in Dearborn (about 20 minutes from downtown). It’s named after Henry Ford, who turned Detroit into Motor City with his Ford Automobiles way back in the early 1900’s. A lot of the museum features old cars (including the limousine JFK was in when he was assassinated and other presidential vehicles), but it’s split up into sections and the automotive part is only one of them.

We had a lot of fun in the flight section, making paper airplanes and pretending we were jetting off somewhere.

I also nerded out over Edgar Allan Poe’s writing desk in the furniture section. What can I say? I was a cliche edgy English major.

It was time for a late lunch by the end of our museum tour, so we kept with the Ford theme and drove over to the Ford Garage… a pretty typical sports bar but overrun by cars. They had some great burgers though, and their bathroom sink made me laugh.

It was still raining when we finished lunch, so we took a bridge to almost-Canada. Belle Isle Park has been on my to-visit list for a while, so even though it was drizzly and gross out, we drove around a bit and wandered around the conservatory. It was a bit of tropical paradise on a dreary day.

We wanted to visit the aquarium too, but it wasn’t open the day we were there. Thankfully there was plenty more for us to do in Detroit, and we can see the aquarium the next time we visit.

We decided it was time for our afternoon coffee break and we chose to go somewhere familiar… but not before we went on a little adventure. I had heard a lot about “The Belt” and its nightlife, but I thought we should stop by during the day since we wouldn’t be there late.

Essentially, it’s an alley filled with murals and small shops, restaurants, bars and the like. We also parked in the Z parking garage right next to it, which has murals on each floor. We drove almost to the top floor looking at all the art.

After running across the street through the rain, we ended up at Madcap Coffee (a Grand Rapids-based roaster and one of our favorites). It was pretty chilly and I needed one of their rich mochas to warm up. 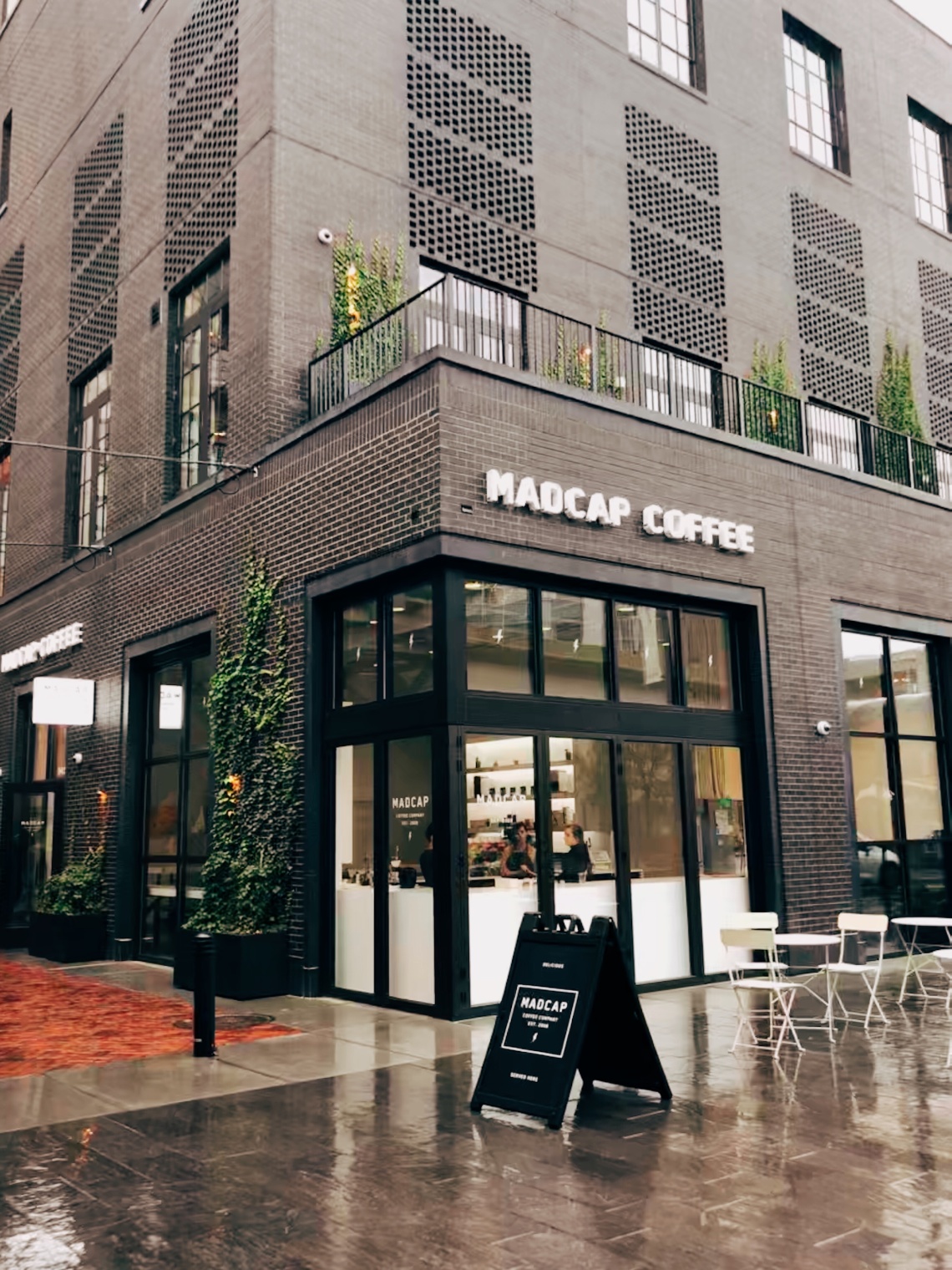 After coffee, it was (unsurprisingly) still raining. I really wanted to explore the Heidelberg Project, but we opted for slowly driving past than walking around because of the weather. The Heidelberg Project is a public art display created out of the houses that fell into disrepair after being abandoned. Some of it was pretty inspiring seeing how they’ve given old buildings new life.

We didn’t want to be driving in the pitch black darkness and rain, so we had just one stop left on our little trip.

How could we miss a trip to Ikea? And those meatballs? Yum…

After that, it was just a quick stop at Starbucks for some tea and we were off. It felt so good to be home, but I also can’t wait to visit Detroit again sometime!

m. leeann is a blog project created by meagan degraaf spoelstra as an outlet for thoughts, emotions, advice and idea sharing. come be a part of the growth and adventure! a mix of lifestyle and personal writing, all words and images are created by and belong to meagan leeann.